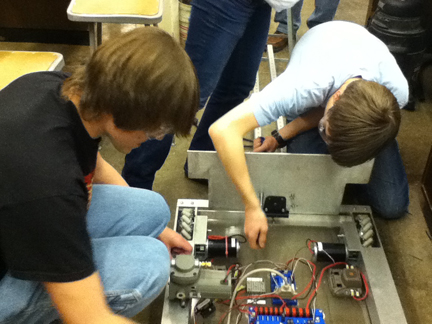 Monroe Trojan Robotics is a FIRST Robotics team located at Monroe High School in Monroe, Michigan. Our team was founded in 2004 by student Tarik DeLand, and coordinated by current Career & Technical Education Director Bill Ferrara. In 2005, the team was handed over to electronics teacher Steve Ketron, and then to Physics teacher Kyle Christensen in 2013. While the team has hit a couple rough patches, including splitting up into multiple teams, we learned and became stronger, merging once again and becoming a family of students.

Our goal is ultimately to introduce the surrounding community to the experiences of science and technology, taking after the mission of FIRST itself. To achieve this, we participate in fundraisers and events all around the community, and have become well-known locally. In the past, we've provided car washes and raised money for the local Relay for Life. In addition to that, we attend the Monroe County Fair each year, talking to the general public about what we do.

The team has attempted to expand it's community outreach by taking advantage of several web services, including YouTube, Twitter, and Facebook. We also released a monthly newsletter called "From the Crow's Nest," ended its run in 2010. Older copies can be downloaded from the Newsletter tab at the top of the page.