This year's FRC challenge is Logo Motion, which is played on a 27'x54' field. On each end of the field are scoring racks on which alliances of three teams each hang game pieces to score points. In the center of the field are four posts used in the end of the game to score bonus points.

The objective of Logo Motion is to hang appropriate game pieces on the scoring pegs at the end of the field. The game pieces are inflated tubes of varying shapes, including circles, squares, and triangles (the components of the FIRST logo). Teams can place the tubes on the rack in the correct order of the logo to score bonus points. 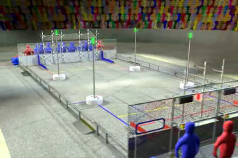 During the autonomous period, robots are given one uber-tube each and must place them on the scoring racks. Robots may use lines on the floor to move, or use the vision targets on the scoring pegs, or both, to move appropriately. The robot may also be preprogrammed with movements to score from certain positions. Uber-tubes that are placed during the autonomous period score bonus points. 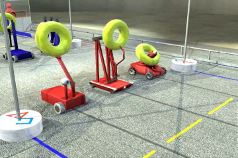 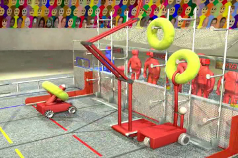 During the teleop period, human players control robots to pick up tubes from their stations at the opposite end of the field. The robots must then be moved to place the tubes on the scoring grid. Tubes may be placed anywhere, but more points are awarded for creating the FIRST logo, or placing game tubes over uber-tubes. 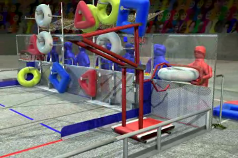 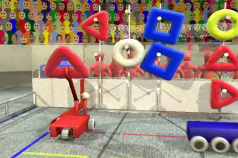 Each robot may only have one game piece at any given time, or the alliance will be penalized. Opposing robots may block other robots from entering the alliance zone (scoring area), but may not enter the area themselves or interfere with scoring. 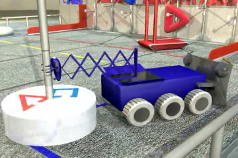 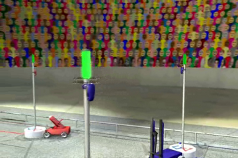 Host robots may not touch the tower or the top of the base, and minibots must be deployed below the deployment line on the tower. If a minibot is launched too soon, the tower is deactivated, and if the minibot is not on a tower, the highest scoring tower of that alliance will not be counted.

Take a look at this year's game video for more information on the game!